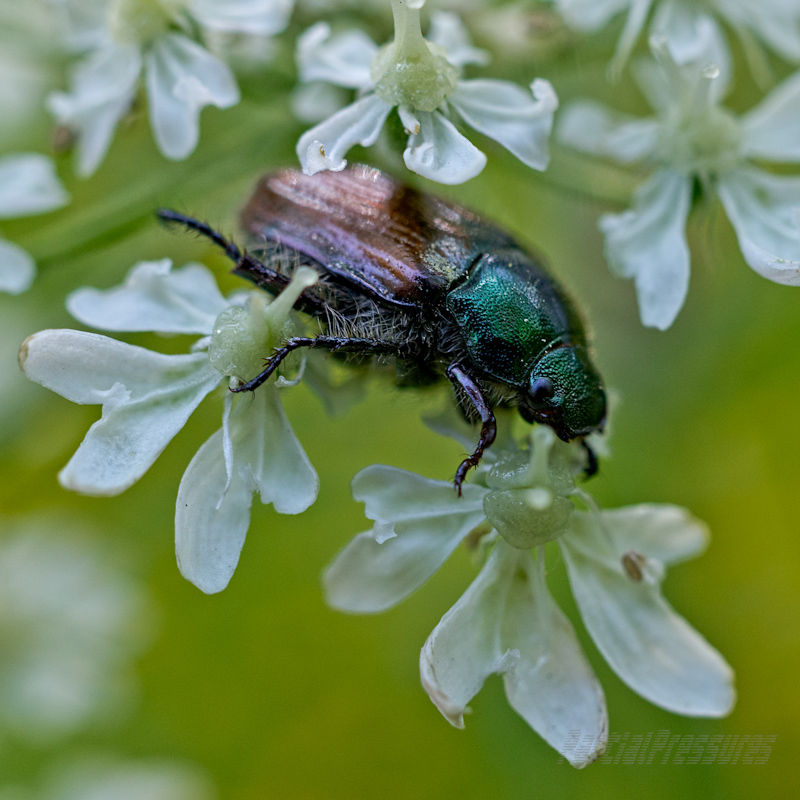 Previous Next
← previous day next day →

Posted by Spike (not Bristol, United Kingdom) on 3 June 2011 in Animal & Insect.

Another of the countless beetles on cow parsley. This one was just sitting, chilling. Possibly literally chilling, as the temperature was dropping at the time. Luckily, the wind dropped for a moment or two as well, so I was only really inconvenienced by the brambles and nettles while trying to take this.

My best guess for IDing this one was that it's a Margined Vine Chafer Anomala dubia; but given my (cough!) record of accuracy in these matters, it's far more likely to be a Garden Chafer (aka Bracken Chafer or June Beetle). Thanks, Daniela! ;-) Either way, you don't want it laying eggs in your lawn!

Thanks for stopping to take a look.

Excellent macro Spike! I think it is Phyllopertha horticola, in germany we call him also the june beetle.

@daniela scharnowski: You could well be right. They seem to be closely related species, despite the wildly differing names, and I think both are common enough here. In whatever photos I was looking at, the Anomala was a marginally closer match, but I've just seen others where it's the other way. BTW, is it just me, or does "Anomala dubia" seem like a joke name? (my Latin is practically non-existent, but it seems to say "uncertain anomaly")

We call them the June Beetle here as well, though we don't see many of them in Arizona. Great detail and look at the colors. Amazing how beautiful a bug can be if one takes the time to look closely.

oh! how can you find these things..??!
nice composition!

haha, indeed the anomala dubia sounds like a biologist´s joke ;) the shots I´ve seen now from that species does look as if the brown wings/shield are more round and much more pale. I was so quick witgh the name from this because I´ve found that beetle many times in our garden - it likes to eat the petals of flowers, so beware ;)